Many clinical trials for new Alzheimer’s drugs try to clear plaque on the brain. The toxic plaques are made of amyloid-beta. Researchers recently discovered another Alzheimer’s culprit, overlooked for 30 years, called amyloid-ETA.

Learn how balancing these two suspects may hold the key to success in current clinical trials.

Alzheimer’s is associated with the appearance of characteristic neurotoxic protein aggregates that form plaque in the brain.

Where Does Plaque Come From?

Chemical analysis of Alzheimer’s plaques reveals that they are made up of a family of short protein fragments, referred to as beta-amyloid peptides. 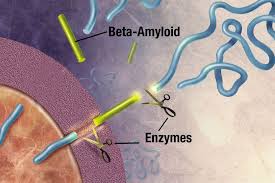 Beta-amyloid breaks off of a bigger protein called APP. The break is caused by the scissor-like action of two enzymes that "cut" an APP "thread" in two places. These two enzymes are called beta-secretase and gamma-secretase. Many clinical trials are trying to cure Alzheimer’s by stopping this series of events.

An international team of researchers led by Christian Haass (Professor of Metabolic Biochemistry at LMU and Speaker for the German Center for Neurodegenerative Diseases in Munich) and Dr. Michael Willem (LMU) has now made a discovery which extends this picture of the pathogenesis of Alzheimer’s disease. This discovery has potentially far-reaching implications for our understanding of the condition:

Its discoverers refer to the newly characterized protein fragment by the Greek letter eta, calling the protein "amyloid-eta" or ‘amyloid-η’.

“The processing pathway that produces it has been overlooked for 30 years. This is because investigators including myself have focused their attention on elucidating the origins of the beta-amyloid and on attempts to cure Alzheimer’s by inhibiting production of this peptide,” Haass explains. The paper that describes the generation of amyloid-η appears in the new issue of the journal “Nature”.

In collaboration with neurobiologist Dr. Hélène Marie based at the IPMC-CNRS in Valbonne (France) and with the local colleagues from the Technical University of Munich (TUM) in the Synergy Excellence Cluster (Professor Arthur Konnerth and Dr. Marc Aurel Busche), the LMU researchers have also studied the effects of the eta-amyloid on nerve-cell function in the brain. Beta-amyloid is known to make nerve cells hyperactive, and now it turns out that the eta-amyloid antagonizes this effect. “So here we have two small peptides snipped from the same precursor protein, which have opposite effects on neuronal activity, and whose actions must normally be carefully balanced,” Haass explains.

These findings have immediate implications for the many ongoing clinical trials in humans targeted to beta-amyloid. One of the trials, for instance, is designed to ascertain whether or not pharmacological inhibition of beta-secretase (the enzyme that initiates the release of the toxic beta-amyloid from APP) can reduce memory loss in patients with Alzheimer’s. Haass, Willem and colleagues confirmed that blocking the action of the beta-secretase does indeed reduce levels of beta-amyloid. However, this is accompanied by a massive increase in the amount of eta-amyloid generated. “This could result in attenuation of neuronal activity and might therefore compromise brain function,” says Haass. He therefore suggests that investigators need to be on the look-out for any signs of unanticipated side-effects in the current clinical trials.

Professor Robert Vassar and colleagues (the researchers that discovered the BACE function) reported that in AD , "UPSTREAMS" , the VASCULAR AGEING, leads to the BRAIN ENERGY DEPRIVATION,by disorders in glucose transport and metabolization, and to mitochondrial disorders , etc.Then it Brain Energy Deprivation, that is responsible "DOWNSTREAMS", to INCREASES THE BACE1 LEVELS,increasing BETAMYLOID ACCUMULATION in the brains of the transgenic mouse model of AD.Then,using our Rational Thinking,if "UPSTREAMS",the Brain Energy Deprivation, leads to BACE accumulation , researchers could treat the brain energy deprivation, that in consequence will prevent and treat the BACE accumulation.If pharma companies,Instead to try to Search "DOWNSTREAMS",for BACE INHIBITORS,if they based in Vassar findings and in Logical Reasoning,starts to use and develops supplements (as ALCAR,Glucuronolactone,Carnosine,Ketones,etc.)and others drugs to Treat,"upstreams" the metabolical, molecular and biochemical disorders,that cause Brain Energy Deprivation,they will Increase the Brain Energy,Controlling in consequence the BACE Accumulation (and the betamyloid accumulation),in a more logical and "physiological" way, without No need of BACE INHIBITORS(and it aweful side effects).Just search in Google to the article in the site Alzheimer Research Forum, with the words:"Paper Alert: Energy Deprivation Drives Up BACE Translation"