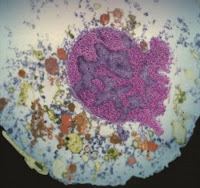 Leading researchers from Johns Hopkins found that despite their very different causes and symptoms, stroke, Alzheimer’s, Parkinson’s, TBI and Huntington’s have a shared mechanism of a distinct form of “programmed” brain cell death. They named this process “parthanatos.” Learn how this discovery potentially opens a new avenue of drug development to prevent, stop or weaken the process.

Despite their different triggers, the same molecular chain of events appears to be responsible for brain cell death from strokes, injuries and even such neurodegenerative diseases as Alzheimer’s. Now, researchers at Johns Hopkins say they have pinpointed the protein at the end of that chain of events, one that delivers the fatal strike by carving up a cell’s DNA. The find, they say, potentially opens up a new avenue for the development of drugs to prevent, stop or weaken the process.

A report on the research appears in the journal, Science. 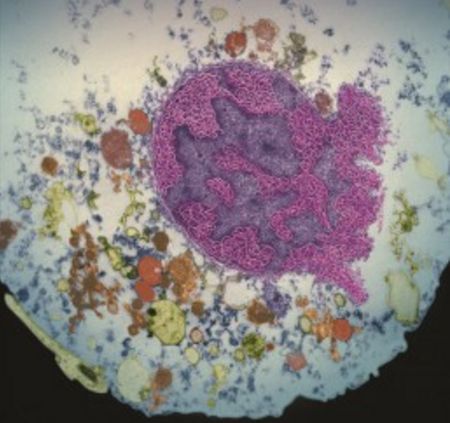 Nucleus of a cell undergoing parthanatos.

The new experiments, conducted in laboratory-grown cells, build on earlier work by research partners Ted Dawson, M.D., Ph.D., now director of the Institute for Cell Engineering at the Johns Hopkins University School of Medicine, and Valina Dawson, Ph.D., professor of neurology. Their research groups found that despite their very different causes and symptoms, injury, stroke, Alzheimer’s disease, Parkinson’s disease and the rare, fatal genetic disorder Huntington’s disease have a shared mechanism of a distinct form of “programmed” brain cell death they named parthanatos after the personification of death in Greek mythology and PARP, an enzyme involved in the process.

“I can’t overemphasize what an important form of cell death it is; it plays a role in almost all forms of cellular injury,” Ted Dawson says. His and Valina Dawson’s research groups have spent years delineating each of the links in the parthanatos chain of events and the roles of the proteins involved.

The current study, they say, has completed the chain. From previous studies, the researchers knew that when a protein called mitochondrial apoptosis-inducing factor, or AIF, leaves its usual place in the energy-producing mitochondria of the cell and moves to the nucleus, it sparks the carving up of the genome housed in the nucleus and leads to cell death.

But AIF itself, they say, can’t cut DNA. So then-postdoctoral fellow Yingfei Wang, Ph.D., now an assistant professor at the University of Texas Southwestern Medical Center, used a protein chip to screen thousands of human proteins to find those that interacted most strongly with AIF. Working with the 160 candidates she uncovered, she then used custom molecules called small interfering RNAs to stop each of those proteins’ manufacture, one by one, in lab-grown human cells to see if doing so would prevent cell death.

One of the 160 proteins, known as macrophage migration inhibitory factor (MIF), was a winner. “We found that AIF binds to MIF and carries it into the nucleus, where MIF chops up DNA,” Ted Dawson says. “We think that’s the final execution step in parthanatos.”

The group reports that in work to be published, it also identified a few chemical compounds that block MIF’s action in the lab-grown cells, protecting them from parthanatos. Dawson says they plan to test these in animals, and modify them to maximize their safety and effectiveness.

He cautions that while parthanatos is known to cause cell death in many brain conditions, MIF’s ability to chop up DNA has so far only been definitively linked with stroke — when the MIF gene was disabled in mice, the damage caused by a stroke was dramatically reduced. “We’re interested in finding out whether MIF is also involved in Parkinson’s, Alzheimer’s and other neurodegenerative diseases,” he says. If so, and if an inhibitor of MIF proves successful in testing, it could have implications for treating many conditions, he says.

This work was supported by grants from the National Institute of Neurological Disorders and Stroke (grant numbers NS078049, NS067525 and NS38377), the National Institute on Drug Abuse, (grant number DA000266), the American Heart Association (grant number 12SDG11900071) and the University of Texas Southwestern Medical Center Department of Pathology Startup funds and UT Rising Stars. Ted Dawson is the Leonard and Madlyn Abramson Professor in Neurodegenerative Diseases. The authors acknowledge the joint participation by the Adrienne Helis Malvin Medical Research Foundation through its direct engagement in the continuous active conduct of medical research in conjunction with The Johns Hopkins Hospital, the Johns Hopkins University School of Medicine and the foundation’s Parkinson’s Disease Program M-2016.