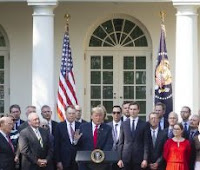 $2.34 billion in Alzheimer’s research funding for 2019 was signed into law by President Trump.
The good news is that this tops last year’s research by $425 million, even exceeding standing national proposals.

A spending bill that allocates $2.34 billion to Alzheimer’s research funding for fiscal year 2019 was signed into law by President Trump. The bill passed the Senate last month by an 85–7 vote, and was approved by the House in its final form by a 361–61 vote on September 26. This 2019 Alzheimer’s budget tops last year’s spending on the disease by $425 million.

The $2.34 billion proposal for AD research still pales in comparison to the estimated $277 billion the country spends every year on dementia care, Senator Roy Blunt told the Senate.

According to the Alzheimer’s Association, this price tag includes $186 billion in Medicare and Medicaid payments. Without a cure, government spending is predicted to rise to $1.1 trillion by 2050, Blunt added.

Bruce Lamb of the University of Indiana School of Medicine in Indianapolis noted the funding exceeds the $2 billion annual budget proposed in 2011, when NAPA (The National Alzheimer’s Project Act) was first passed.

Dr. Lamb told Alzforum.org, “Given some of the recent disappointments in the AD clinical trials, we likely will need to further increase investments to help speed the process of identifying new drug targets, to improve the drug-discovery pipeline, to redesign clinical trials that target specific patient populations, and to discover lifestyle interventions that slow or prevent dementia.”

“There is little doubt that hard work from activists, researchers, editorials, and public support played their parts. Now it is up to NIH to effectively utilize this funding,” said Dr. Debomoy Lahiri from the Indiana School of Medicine.

Ilya Bezprozvanny of the University of Texas Southwestern Medical Center in Dallas called new budget fantastic news. “Hopefully it will enable testing of multiple new ideas about the causes of AD (Alzheimer’s Disease) and help in developing new treatment options in addition to amyloid-targeting drugs, which are currently being tested in clinical trials,” Bezprozvanny said.

For the full report, go to, “$2.34 Billion Budget for Alzheimer’s Research” on Alzforum.org.

Do we have to make EVERYTHING about Trump? Our Congressional advocates and the faithful individuals who pushed for years on this issue deserve the headline.