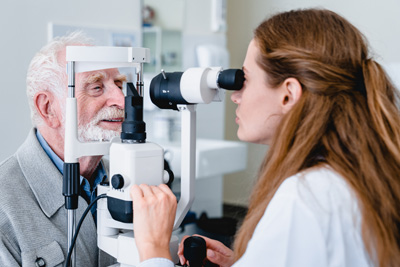 Eliminating sensory loss due to cataracts — by removing the cataracts — could reduce one’s risk of developing dementia, according to research conducted in Washington State. Learn more.

Undergoing cataract removal was associated with a lower risk of developing dementia among older adults, according to a study supported in part by NIA.

The study, published in JAMA Internal Medicine on Dec. 6, 2021, suggests that the improvement in the quality of life for the affected individual and family is likely to be considerable, given the substantial association and its lasting effect beyond 10 years.

The prevalence of hearing (1 out of 3) and vision impairment (1 out of 5) in adults age 70 or older in the United States is high.

Because sensory impairment and dementia are both strongly associated with aging, more knowledge about the association may have important implications for adults as they age, particularly if interventions to improve sensory function reduce dementia risk.

For this prospective, longitudinal cohort study, researchers analyzed data from a subset of participants from the Adult Changes in Thought (ACT) study – an ongoing population-based cohort of randomly selected members of Kaiser Permanente Washington.

Participants were 65 years or older, were dementia-free at the start of the study, and were diagnosed with cataracts before the onset of dementia.

Researchers found that participants who underwent cataract removal surgery had nearly 30% lower risk of developing dementia compared with participants without surgery, even after controlling for numerous additional demographic and health risks.

In comparison, glaucoma surgery, which doesn’t restore vision, did not have a significant association with dementia risk.

One of the major strengths of this study is that it was based on a large prospective, community-based, observational cohort that allowed for years of follow-up starting before participants developed dementia.

Researchers noted that because the study population was predominately white, the findings may not be representative of other groups. Recent enrollment efforts for the ACT study include new strategies to recruit a more diverse population.

Some of the limitations of this study were that participants were primarily white individuals, and researchers evaluated only the participant’s first cataract surgery and it’s unknown whether subsequent surgery in the other eye impacted dementia risk.

If validated in future studies, cataract surgery may have clinical relevance in older adults at risk of developing dementia.