MEMORY & THINKING are activated by acetyl-choline. Alzheimer’s drugs boost acetyl-choline. Other medications, from allergy to insomnia drugs, may be anti-cholinergic, lowering acetyl-choline. This can spell trouble in dementia. Learn which drugs to avoid and what to look out for.

Drugs widely prescribed to the elderly could be responsible for a decline in cognitive and physical function according to research from the University of East Anglia and the Regenstrief Institute.

A key report reveals that anti-cholinergic drugs — which are used to treat conditions including asthma, high blood pressure, insomnia, dizziness and diarrhea — could impact physical functions in elderly patients such as eating and getting dressed. 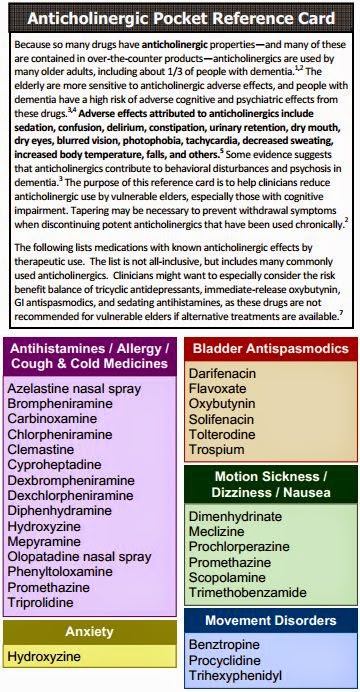 Up to half the UK’s elderly population are prescribed at least one medication with anti-cholinergic properties. Other anti-cholinergic drugs are also sold over the counter without the need for a prescription.

These medications affect the brain by blocking a key neurotransmitter called acetylcholine. But they have been associated with side effects including dizziness, sedation, confusion, delirium, constipation and blurred vision.

Previous studies have shown a link between these drugs and cognitive impairment, but this study is the first to summarise evidence of a physical decline among the elderly.

The research team looked at 46 studies from around the world that included 60,944 patients who had taken anti-cholinergic medications for up to 10 years.

“This is the first research to show a significant decline in physical, as well as cognitive, function. This means patients could become less and less able to carry out everyday activities like walking around, feeding themselves, washing and getting dressed.

“This is likely due to the direct effect on cholinergic neurons compounded by an increase in the blood-brain permeability.

“We have also seen that the type of anti-cholinergic drug may be important, and more research needs to be done to ascertain which types are more dangerous than others.

“Further studies are also needed to establish whether the cognitive decline is definitely induced by these medications — or the whether the diseases for which they are prescribed are a factor too.

“In the meantime, the prescription of these medications for people with dementia should be cautiously assessed, monitored and attempts made to reduce the burden whenever feasible. Clinicians should conduct regular reviews of the medication taken by their older patients, both prescribed and over the counter, and wherever possible avoid prescribing multiple drugs with anti-cholinergic effects.”

The international research team included experts from the Regenstrief Institute and the Indiana University Center for Aging Research in the US, Aston University, the University of Aberdeen and the Norfolk and Norwich University Hospital in the UK.

Co-author Dr Noll Campbell, from the Regenstrief Institute, IU Center for Aging Research and Purdue University College of Pharmacy, said: “Anticholinergics, both over-the-counter and prescription medications, impact the lives of older adults in ways doctors, patients and their families may not realize.

“I don’t see use of these medications declining. Doctors and patients are familiar with these drugs and unfortunately are far less familiar with equally effective alternatives.”

Dr Campbell advises that rather than taking sleeping pills with anti-cholinergic properties, one could refrain from napping, limit evening exercise and remove distractions from the bedroom. Meanwhile hospitals and nursing homes could work to keep older adults awake and stimulated during the day, naturally encouraging night-time slumber.