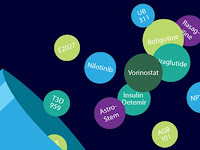 126 DRUGS ARE IN ALZHEIMER’S clinical trials. “Every single one represents hope,” according to Closing in on a Cure: Alzheimer’s Clinical Trials Report. Read the report. Learn about the trials.

There are 126 drugs in clinical development for Alzheimer’s disease and “every single one represents hope,” according to Closing in on a Cure: Alzheimer’s Clinical Trials Report. The report, released by the Alzheimer’s Drug Discovery Foundation (ADDF), identifies the drugs for Alzheimer’s that have reached human clinical trials.

“Alzheimer’s has too often been a story of failure,” says Howard Fillit, MD, Chief Science Officer at the ADDF. “But this report shows a diverse group of promising drugs are nearing the finish line. The first disease-modifying treatment for Alzheimer’s is likely in clinical trials right now. We are closing in.”

While drugs targeting beta-amyloid (a protein that comprises the plaques common in Alzheimer’s) remain the most prevalent, other drug targets such as inflammation, mitochondria, and neuroprotection are gaining ground. This broadening of targets is due in part to the efforts of the ADDF, which funds new approaches to treating Alzheimer’s. Nearly 20% of the drugs now in clinical stages have received ADDF support.

In addition to the emergence of innovative targets to treat Alzheimer’s, the report highlights other aspects of the current clinical pipeline. This includes the relatively small number of repurposed drugs being tested, the shift toward trials with earlier-stage patients, and persistent challenges such as recruitment and the relative lack of validated biomarkers for innovative targets. It also defines a path forward for the field, specifically the need for experimental trial designs and combination therapy approaches.

Closing in on a Cure: Alzheimer’s Clinical Trials Report focuses on potential disease-modifying drugs, which are designed to slow, stop, or possibly even reverse the course of Alzheimer’s. Because clinical trials are the final stages of a drug’s development, some of the drugs listed in this report could be available to patients in just a few years. Highlights follow:

To find a clinical trial in your area, go to the U.S. government’s site, ClinicalTrials.gov/ct2/search .

I just hope so as being a carer is horrific and the patient is often still aware and helpless. May this be a breakthrough that others do not have to experience what I have been through.

Why do we see nothing about research into the known nutritional deficits of Cholesterol, Acetylcholine, Glutathione and Testosterone in men? Doctor's will supplement with testosterone when they should be giving them Zinc. I believe this is the reason why more women than men get Alzheimer's. Men store Zinc in the prostate, sperm and testes, which women, of course, do not have. Zinc is involved in insulin balance. All folks with dementia should be on Zinc (min. 50mg anyway as it fights infections like UTI's). My mom's sodium pump is out of whack and GP and general physician ignore and suggest eat more salt. Nuts! When I looked up in my mom's medical textbooks, the only cause that made any sense was a toxic thyroid and I suspect it is fluoride build up and toxicity that causes this. Once the thyroid affects the sodium-pump you will see excess Calcium and a Sodium deficiency, which in turns means a deficiency of Acetylcholine (anti-oxidant) in the brain as Calcium is involved with that production. Some Alz drugs try to increase production of this anti-oxidant. Nuts, not to get the sodium-pump back in balance, but one has to detoxify all the toxic substances. Definite cause and effect and don't get me started on the crap low cholesterol advice and cholesterol drugs that remove all the good and bad cholesterol from the body. If your LO gets sugar cravings it is a clear sign their brains need feeding and my mom and I have proved that the switch to coconut oil sorts that out. No "healthy" yellow oils and spreads like Canola, Sunflower and so on… they cause oxidation and inflammation when heated. Doctors do not study nutrition and that is the bottom line, but not sure what the researchers excuses are for not seeing the "wood" for the "trees". Paid not to!

PS: Supplement a Magnesium deficiency transdermally. Not orally. Foot soaks of Epsom Soaks daily and then weekly basis will do it as that is Magnesium Sulphate.